The Struggle Against Entropy

The Struggle Against Entropy 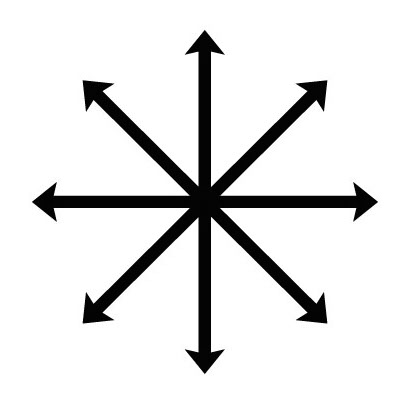 I often think about whatever job I'm doing as a "struggle against entropy". Entropy, as Muse explains it:

All natural and technological processes proceed in such a way that the availability of the remaining energy decreases. In all energy exchanges, if no energy enters or leaves an isolated system the entropy of that system increases. Energy continuously flows from being concentrated to becoming dispersed spread out, wasted and useless. New energy cannot be created and high-grade energy is being destroyed. An economy based on endless growth is unsustainable.

We all know that entropy is going to win, eventually. That's considered a given in physics. And empirically we can say that's true in our own lives. Our laundry goes from clean to needing to be cleaned; our meals go from cooked to eaten; our bodies go from born to dead. Even when we make efforts every day to slow or reverse these processes, eventually, inevitably, entropy will win.

Some jobs, the amount accomplished vs. the effort put in forms a sort of logarithmic graph. For example, working as a bartender: at the end of the day, after all your customers have been served, your bar is clean, your glasses are clean, your trash is taken out, you have re-stocked, and you are ready for the next shift. If you don't do everything well, you'll be behind the next day, and things will be harder going; the lack of effort compounds to form a morass of difficulty. However, there is no getting ahead; even if you clear every ashtray and wipe every counter as soon as they are dirtied; even if you restock every cold beer as soon as it is served; you still can only reach a certain output. You still, at the end of the day, will end up with clean floors, clean glasses, and a fresh start for a new shift. Any optimizations on top of that (a better inventory or POS system, batching work when mixing drinks, etc.) only gains a small amount of additional output. Hence the logarithmic graph. Eventually you come to the limit of how much you can optimize that type of job.

Other jobs, however, form an exponential graph in terms of amount accomplished vs. inputted effort. Technology plays a key role in these situations. Any time when you can replace work that a human normally needs to do with a (semi-)automated system, you are increasing your output relative to input. And if your job is to create said technology, then your input outputs an output that in return multiplies future inputs: exponential. It's acceleration: applying the same amount of force equally over time results in a compounded velocity. It's a form of bootstrapping: companies (specifically startups), building ideas and systems around existing ideas and systems until they can impact 10, then 100, then 1,000, then 100,000, then 1,000,000 users; not with 1,000,000 times the effort, as it would be if you were trying to run a bar with 1,000,000 customers; but instead with (roughly) the same (probably less than a factor or two of 10) amount of man-hours.

And that's our ultimate weapon in the struggle against entropy: our time. Some things require linear relations for our efforts: sleeping, exercise, hobbies, volunteering, time with family, watching TV. But for me, work -- where I spend at least 1/3 of my day -- is an area where I constantly look for areas to improve my multiplier. If there is a task that I am frequently needing to perform that seems like a good candidate for automation, I need to automate it. Why? Because if I don't, I feel like I'm stuck in a hamster wheel running in the same circle over and over. I don't want to solve the same problems every day, day in, day out. I want to solve new problems; interesting problems; problems that make tomorrow better than today. Because these types of problems mean that in the struggle against entropy, I'm not just entrenched, holding the line, content to not be losing ground; no, I'm winning battles, advancing forward, and marching towards a goal that grows ever-nearer. And in this struggle against entropy, technology is my rearguard, allowing a retreat to a safety zone of automated processes and analyzable numbers so that even when I lose a battle, all is not lost. We can pick up our wills and fight the struggle against entropy for yet another day.